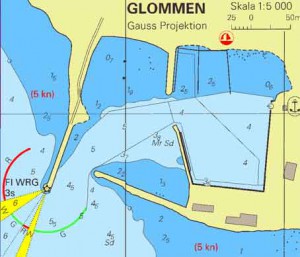 If you are sailing north or south along the swedish westcoast it is very comfortable to reach Glommen guest harbour. There is an outer harbour just for the protection of the inner harbour.

When you enter the inner harbour you have to look for berths with the usual green or red signs to show that it is empty for some time. There are also guest berths by the pontoon jetties. Those, however, are not quite comfortable in a blow from the southwest. No mooring on the outside of the first pontoon you pass on entering – but on the inside of that same pontoon a rather big boat will rest comfortably.

Through its prominent position this boulder has always been an important sea mark on this coast which is otherwise so uniform. The Glumsten stone is mentioned in the old sagas (in connection with the military expedition of King Harald Hårdråde in 1061 and King Hakon´s expeditions to Halland in 1256).
One detachment of King Hakon´s army went ashore near the Glumsten boulder August 24th 1256 and the following day they ravaged the nearby country. After that they went by boat down to the river Ätran and burnt the borough, that is Falkenberg.
As you understand you have come to an historic site where you can enjoy the smell and the sounds of an ever changing sea.

On 8th of January 2005 we had a violent storm raging on this coast. Our harbour was severely damaged and we have had to make extensive repairs. Now we can begin to see the positive effects and give ourselves and our guests better conditions than ever. The harbour has been dredged so that we have depths of around 2,8 meters.

When you pay your harbour fee you will also get a code for the codelock of the little brick building north of the harbour. Inside you will find both showers, laundromat and toilets. If you need to shop for groceries you can walk to the kiosk Solsidan or a little further up the road to COOP NÄRA. The kiosk also has a café and a restaurant.